Memorial – I call it “Love and Joy”

The story of the memorial by Jeanie Mellersh - October 2013 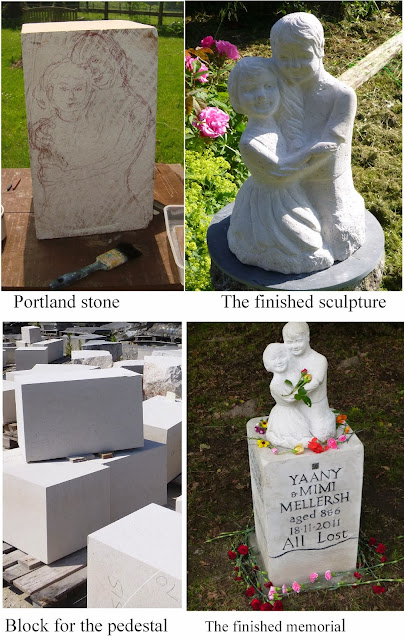 When Yaany and Mimi died, there was no funeral, no bodies. The word “memorial” came to mind as we talked together. I thought, right, I'll go for it, and talked to James (our vicar) about one in the churchyard. One evening two weeks later James called in and said “I'm going to Winchester tomorrow morning to speak to the Diocese. Can you let me have a drawing of how it will be.” I looked blank “I haven't got a design.” “Here's a paper and a pen, could you draw something?” he asked. I did. Fifteen seconds later, he said “OK, Ill show them this,” put it in his pocket and went away. A few days later the answer came back “It's passed. Go ahead!” Is this a record for the world's fastest memorial design, I wonder?

I then started modelling the sculpture out of all sorts of materials, clay from the forest, cheese, a big block, plasticine and made many drawings. The design was two children with their arms around each other looking happy and lovely.. The reason for using cheese was that you can carve cheese, whereas you can only model plasticine and clay and they are very different processes,

I made a two inch model of the statue out of clay and Nick and I went with this tiny model to Portland to find some stone for carving.

At Albion Stone quarries we met Tony Booker. He showed us round a huge area all filled with stone blocks. Nothing seemed quite right. Then Tony led me to the perfect stone. It was very lovely all creamy white and perfect. I was very excited.

I went home, ordered some new carving tools and equipment and started to work With a big chisel and mallet I wildly hit big lumps off the stone. “When you've finished it will be the size of your fist” said a friend – but I wasn't worried. It was hard physical work. I began at the top of the stone. It was very straight sided double cube in shape. I drew two circles on the top. “That is the boy' head and that is the girl's head,” I said, and chipped down and down, chipping off all the bits that weren't children.

I changed to smaller chisels and lighter hammers, and I happily worked away in the garden. Thing started to get specific. I was close to the actual figures, I felt I was almost chipping by the children's flesh. I felt I may draw blood if I make a slip, One day I put down my chisels and said “I can't go on.” I couldn't touch the chisels. I didn't know why. I was working through the grieving process but also working into the creative process, and it suddenly caused me to stop. I didn't know what to do or where to go for help I think it was a touch of post traumatic stress after the tragedy. It wasn't creative block. I was raring to go on with the carving, but trapped within myself. I had been carving the heads.

My daughter Lucy, who co-incidentally has taken up carving, had been on a wood carving course in the Austrian Tirol. She phoned me and said “I think I know someone who can help you, My woodcarving tutor. He's got one place free and he also carves stone”. I booked up and went for three days and he did help me. His name was Pascal Wirth and I am very grateful to him. I thought I wouldn't be able to lift a chisel, but I carved a marble cherub's head using an air hammer, and the problem melted away. I came back to Minstead and finished the carving. 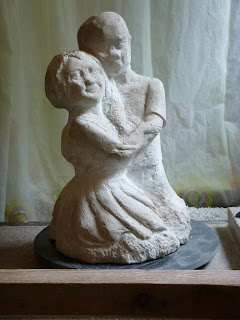 Then it was time to do the plinth. The plinth was to be on a large simple straight sided stone. I went to Albion quarry in Portland again and after walking around the stone pieces for half an hour or so, Tony Booker led me to the perfect stone again. We were expecting to pay a lot for it. But no! Tony had heard the story of the children and Albion Quarries generously agreed to donate both the stones we had used. Thank you Albion! Thank you very much for your kindness. Tony and Aidy Wilcox loaded it, with infinite care and expertise, into the back of the car. and we drove off for a lovely weekend on Portland Bill.

The stone was much to heavy for us to move but, helped by kind neighbours, we got the stone block out of the car, onto a little farmer's truck and wheeled it into a garden, We put it up where the lawn ends in a wall so I could carve the letters standing up..

I drew out the lettering but on trial pieces of stone. I soon realised that my attempts at letter carving were appalling. I contacted the excellent letter carver, Mary Skelton of Ditchling. She kindly gave me advice and a virtual lesson over the phone after we had sent her a video of me attempting to carve on one of the trial pieces of stone. I worked hard on the problem but was still struggling when I remembered I had worked with another excellent letter carver, John Andrew, at a stone symposium at Lyndhurst Church. He came over to visit from Christchurch and helped me a lot. Like me, John is left handed and we hope, one day, to make a video of him carving and put it on You~tube, where there are a lot of video's of right handed letter carving but no good ones of left-handed carvers. 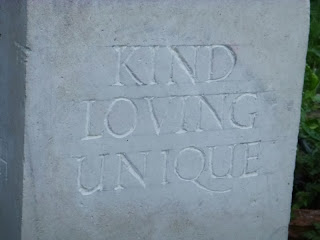 I looked at the large stone like a huge perfect block of ice cream. I drew it out in pencil lines, not too straight, letters a bit wobbly and struggled to make it good , but too scared to carve, then I took courage and carved the words. The hardest part was carving the date the little ones died.
At this time I realised that many people I knew had lost a child. So I carved “Remember all lost children,” around the base of the plinth. I hope parents of lost children will find solace in the memorial and remember the joy and love their child brought them.

I painted the lettering black and I was pleased with the result. Steve Dent of Lockerley Stone erected the completed memorial one morning. Nick and I placed flowers on and around it and photographed it. So now it is in Minstead Churchyard for long after I am gone. I hope it brings a smile and uplifted heart to all who see it and think of the love and joy children bring into our lives. I call it “Love and Joy.”

Memorial finished and up in the churchyard

Here are a few pictures of the memorial in place in Minstead Churchyard.  Jeanie will be posting more about the carving and the story behind the memorial in a day or two,

Meantime here are some pics of it looking very nice.


Posted by Jeanie & Nick Mellersh at 9:47 AM No comments:

Carving finished on the Yaany and Mimi memorial sculpture

The carving of the statue for the memorial is finished. Now all that remains to be done is to prepare the plinth, mount the statue on it and place it in the churchyard at Minstead. The video below shows the sculpture from all angles. It looks beautiful.

The video lasts about four minutes.

There is a "tiny url" for this which is http://tinyurl.com/mimimemorial

You Tube url is: http://youtu.be/pHxo3ZCbG14


Posted by Jeanie & Nick Mellersh at 2:46 PM No comments:

It's been a long time since the last post on the sculpture.  But now Jeanie is at work again and the carving is almost done.

Only the final shaping and sanding to do now.  To see the sculpture from all sides click on the link to this Youtube video.

You can see how the sculpture looked in August last year at:

Later posts may describe what happened between August last year and now and the interesting carving course at Elbiin alp in the Tyrol
Posted by Jeanie & Nick Mellersh at 12:51 PM No comments: 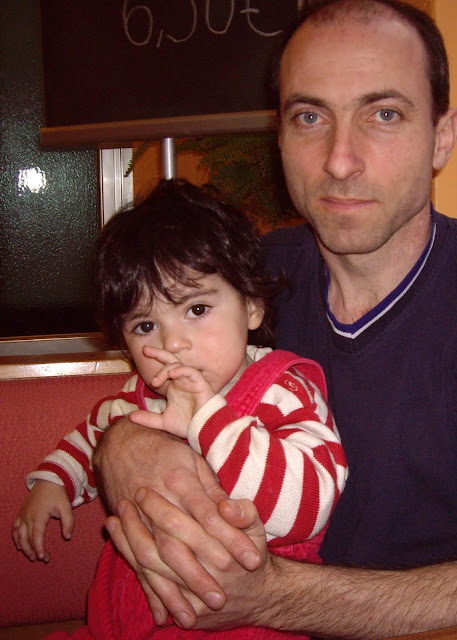 Your little life sang beauty to me, and always will.

I love you so, so dearly, my darling, and always will.

I so miss you.

Love Dad
And love from all of your Dad's family, we miss you so much wherever you are.

This is a link to a video of you singing: http://www.youtube.com/watch?v=E8EPs8Bb1ro 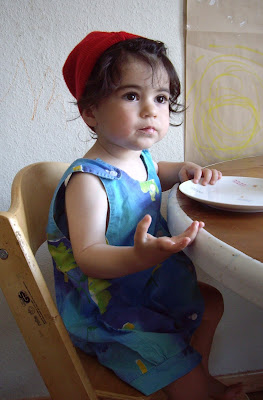 Posted by Jeanie & Nick Mellersh at 12:52 PM No comments:

Jeanie & Nick Mellersh
Nick and Jeanie are a rare couple of talented people. We want to share our ideas, art, poetry and love of life with the world. For more on Jeanie see Jeanie's website http://www.jeanie.mellersh.net